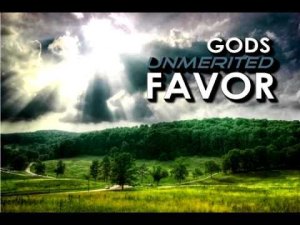 The whole position of man is favorable from God’s perspective. Faith is the pipeline through which grace (favor) flows. This doesn’t mean mankind doesn’t have a role to play in this relationship.

What exactly is favor? Well, favor is defined as excessive Kindness or unfair partiality; preferential treatment: to treat some people with favor and others with neglect. Simply put, to do something for someone, with or without any cause on their end that God would do for all that believe.

His favor was announced in the beginning: Luke 2:14 “Glory to God in the highest, and on earth peace to men on whom his favor rests.” NIV

Notice, man must receive God’s offer of salvation through Jesus Christ before grace’s favor can be obtainable to you. Grace is certainly unmerited favor by which salvation is given; however, it also is the power-word describing the Holy Spirit’s operational means. Favor is a force in the container of grace. It is a verb as well as a noun. It is the action of God on our behalf! For all God’s blessings, such as favor, they must be believed in the heart and confessed with your mouth.

Grace (favor toward mankind) is the realm, where all of God’s Kingdom purposes and will, through salvation can be achieved. It is where the priestly Kingdom operates freely.
Sovereign favor through grace is an enabling power sufficient for growth and help. It is the sovereign favor of God’s grace, that overcomes certain limitations, weaknesses, flaws, impurities, and faults (i.e. carnality) that humankind cannot overcome. It also causes supernatural help from the Lord in everyday circumstances. Speak favor into your life with faith and confidence and you will see supernatural interventions on your behalf. Then give Him the glory.

Psalm 5:12 For You, O LORD, will bless the righteous; With favor You will surround him as with a shield. NKJV
The whole position of man is favorable from God’s perspective. If you have been born-again, this means you.

1. Salvation has brought us to a position of restoration of all things.
2. The whole essence of God’s grace toward us is favor. The whole marvel of the gospel is the special favor of God through Jesus Christ.
3. We have been translated (moved positionally) into the Kingdom of God. We must learn to operate in the Kingdom’s methods and authority.
4. We are anointed with the Holy Spirit and power. The anointing removes the burdens and destroys the yokes that bind.
5. The Kingdom of God operates in union with the revealed Word of God. You must speak faith words in union with God’s word, for favor to work.
6. You have been given the name of Jesus for authority over all the power of your enemies. Stop speaking your fears and speak that you are strong in the
Lord and the power of His might.
7. Favor demonstrates the Love of God extended to each of us.

Begin today confessing favor in all activities you are engaged in.

Please send us a report of what happens when you put this into practice in your life.